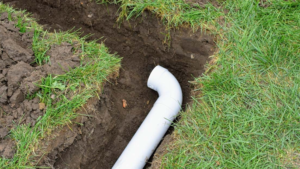 What are French Drains?

What are French Drains?

They are a basement waterproofing Toronto service that focuses on improving the drainage system around your home. Installing a drainage system is essential in protecting your property from costly water damage. A French Drain system is one type of drainage system that might be particularly effective for your home. The experts at Aquatech Waterproofing can evaluate your property and determine if a French Drain is an answer to your Toronto waterproofing needs. We can also install your French drain so that the water stays out of your home and doesn’t cause flooding or unnecessary erosion in your yard.

The key concept behind French Drain installation is that it will redirect water away from your home. French Drains are effective for correcting problems with both surface water and groundwater. If you notice your yard flooding after heavy rain, a French Drain might answer your concerns. Another sign that you might benefit from a French Drain is if you see water pooling against your home at any time.

The earliest forms of French drain installation were simple trenches pitched from a high area to a lower one and then filled with gravel. These may have been invented in France[2], but Henry Flagg French (1813–1885) of Concord, Massachusetts, a lawyer and Assistant U.S. Treasury Secretary, described and popularized them in Farm Drainage (1859). French drains were sections of ordinary roofing tile that were laid with a 1⁄8 in (0.32 cm) gap between the cells to admit water. Later, specialized drain tiles were designed with perforations. It prevents clogging and requires gravel size to vary from the coarse grind in the center. It would then use a fine grind on the outside and was selected contingent on the gradation of the surrounding soil. The sizes of particles were critical to preventing the surrounding soil from washing into the pores, i. e., voids between the particles of gravel, thereby clogging the drain. The later development of geotextiles greatly simplified this technique.

Ditches are dug manually or by a trencher. An inclination of 1 in 100 to 1 in 200 is typical. Lining the bottom of the trench with clay or plastic pipe increases the volume of water that can flow through the drain. Modern French drain systems are made of perforated pipe, i. e., weeping tile surrounded by sand or gravel, and geotextile or landscaping textile. Landscaping textiles prevent drainage material migration and soil and roots from entering and clogging the pipe. The perforated pipe provides a minor subterranean volume of storage for water. Yet, the prime purpose is drainage of the area along the entire tube length. This is assisted via its perforations and to discharge of any surplus water at its terminus. The direction of percolation depends on the relative conditions within and without the pipe.

Subsurface drainage systems have been used commonly for centuries. They have many forms similar in design and function to the traditional French drain.

How To Develop An Efficient Drainage System For A Structure?