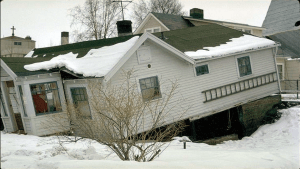 Our basement waterproofing Toronto professionals can help with French drain installation and home foundations. Installing a French drain is a good way of protecting your home from water damage. A French drain, sometimes called a weeping tile, or a blind drain, is a type of trench filled with gravel or has a perforated pipe that helps redirect water away from your home’s foundation.

The perforations can be either small circles or slots, but the slotted pipes are recommended because they don’t allow as much soil into the tube.

While French drains are often used to help prevent water from seeping into a building’s foundation, they have other uses, such as assisting in redistributing water or relieving water pressure.

When French drains are installed, they should permanently be installed near or around the foundation. They’re reasonably easy to install, but having a licensed professional install them is still a good idea just to ensure they’re set correctly. Otherwise, you may find that the water doesn’t drain away quite like it should.

-The French drain has to be installed several dozen inches or more in the soil around the house.
-The perforated drain pipe is installed first, then covered by some washed gravel fill.
-This helps filter the water in the soil down into the pipe.
-Once the water is collected in the pipes, it’s directed away from the foundation and the house.

Some homes won’t need French drains, especially if they’re on relatively flat land or built on top of a slope.
However, water may often collect around your foundation if your house is built on the lower end of a slope. This is where a French drain can come in very handy. The soil may not be able to absorb all of the water, which means it may start leaking into the foundation, the crawl space, or even your basement.

How a French Drain Can Help

Water damage can be brutal to detect at first, especially if you rarely go into your crawlspace, but once it’s noticed, it’s usually relatively extensive and expensive to repair. A French drain will prevent this since it will help carry away a good amount of water from the edge of your house.

A few things to remember when installing a French drain:  The trench can be dug fairly deep (six feet or more), but it needs to be at least two feet deep for a home built on a slab. The perforated pipe always needs to slope downward from the starting point so gravity can help force the water below and away from home.

The piping should be covered by about 12 inches of washed gravel at a minimum. If installed correctly, you’ll find that water no longer seeps into your home’s foundation or basement, keeping it safe from water damage.

Satisfaction Guaranteed Solutions For A Wet Basement
Scroll to top