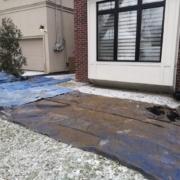 Of course, basement waterproofing is performed before a major storm is a better way to deal with it. You can avoid all the damage that accompanies basement flooding with proper basement sealing before acquiring the ‘water in basement’ issue. You can avoid the costs of mould removal, basement wall repair or even a complete basement remodelling. A good amount of money by having a little bit of foresight.

People specializing in basement waterproofing use many tools to get water out of their basements. You can reverse a flooded basement in no time with interior drainage systems, sump pumps, industrial-strength dehumidifiers, and other even more advanced techniques.

Basement sealing is not what pre-flood basement waterproofing is all about. There are many factors to consider too.

Gutters play a significant role in the prevention of basement flooding. In simpler terms, water would not seep into your basement without water pooling up against the outside of your basement wall. A sound gutter system redirects water away from your home or, in some cases, into a large underground cistern made for managing a week’s heavy rain.

Most people do not immediately connect the basements’ waterproofing and the cracks in the house’s foundation. And suppose you stop and think about it. Water comes in through the foundation, at which point it only has whatever materials your basement walls and floors before it gets into your basement properly. Those materials are usually wood, and water will eventually destroy them or seep through them.

As stated above, drying the basement generally involves pumping any standing water out and then drying up any wet spots that remain by using a powerful dehumidifier.

Basement sealing is usually a process involving more than one step. It generally begins with plugging any visible cracks from the inside of the foundation and basement walls. An adequate waterproofing paint (NOT damp-proofing, but waterproofing) is the second part of the process.

After you polish it off, find the holes (windows, ducts, pipes, etc.) between the inside and the outside, and caulk or seal around them.

Then finally, you can go on with the last repairs. These repairs usually involve finding any mould or water-damaged items and changing them. It’s okay to live in a basement once the damaged goods are replaced (there shouldn’t be many if you haven’t flooded yet). Just don’t take your eye off the smell; it’s the first sign that there’s another leak — but that should not bother you for a couple of years.